The Mountains Are My Home

It is a diverse collection of upbeat songs, including both originals and covers, arranged in Masarie's own traditional music style with hints of jazz and folk.

Creature of the Root

Susannah Masarie recorded her first cd at Tree Sound Studios, in Norcross, GA. It features many talented Atlanta musicians who have contributed to Atlanta's local music scene for decades in various bands.  This first album, Creature of the Root (2009), is comprised of Masarie's original songs highlighted by Charlie Wooten (Zydefunk and The Charlie Wooten Project) on bass, Danny Simmons (Apple Peru, The Bake Off, and The Dreadful Grapes) on lead and slide guitar, singer/songwriter and guitar player Melissa Jo Morgan (Liquid Marble) on harmony vocals, drummer/percussionist Steve Baird (Deep Blue Sun, The Expand Band, The Grapes) on brushes, and Zebulon Bowles (Stop Drop and Roll, Boss Hawg, The Junior League Band) on fiddle.

The Mountains Are My Home 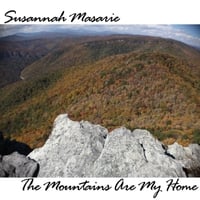 This song is my song about the mountains. My love of the mountains comes from my upbringing in North Carolina. I am originally from Greensboro, I spent my summers growing up in Brevard, and I lived in the Boone area for four years. This song was written on one of my many trips to the North Carolina mountains. Music has been a part of my life from an early age, I was born into a musical family so it isn't surprising that I became a guitar playing, singing songwriter. There is a long history of traditional music that has come from the mountains, I have been greatly influenced by and appreciate that tradition.

Paul Dunaway recorded Doug and Susannah playing the song live in a cabin in the North Georgia mountains.Steve Baird recorded and mixed his drum tracks in Atlanta GA, Steve also did the final mix of the song. Josh Golden recorded Bill Fleming's pedal steel tracks in Downright Studio in Atlanta, GA.The song was mastered at Tree Sound Studios, in Norcross, GA by Paul Diaz and Miguel Scott. The song was included in a compilation cd project called "Thirteen Tunes for Thirteen Moons". This cd was the idea of Bill Fleming and was inspired by the Charles Frasier novel "Thirteen Moons". The cd features the original songs of ten different songwriters, it was release in 2014. I am honored that Bill thought my song would be a good fit for the project.